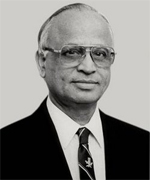 Dr P K Iyengar, former chairman, Atomic Energy Commission, was one of the main scientists behind the actual manufacture of the atomic device which put India on the nuclear map with Pokhran I on May 18, 1974. He worked at the Department of Atomic Energy for 40 years. In 1984 he was appointed director of the Bhabha Atomic Research Centre in Mumbai and in 1990 chairman of the Atomic Energy Commission. Dr Iyengar has received a number of awards for his work, including the S S Bhatnagar Award and the Padma Bhushan. He was among the scientists personally chosen and nurtured by Dr Homi J Bhabha, the father of India’s nuclear programme.